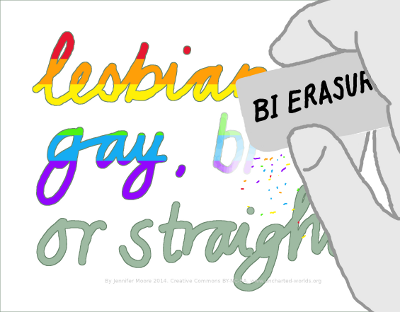 Let's begin by running through some often-heard comments: “It's a phase.” “He's just confused.” “She's only looking for attention.” “They need to pick a side.”

These are pretty obvious, aren't they? They're common enough to be cliches. I've heard variations of these a thousand times, all of them dismissing bisexuality as something that isn't real or permanent.

At their core, these phrases, and others like them, mean that when someone says they're bisexual, they're wrong. That bisexuality isn't real or permanent. That it's all an act. Everyone can see what's wrong with that mindset, right? I hope so, but just in case, let me make it clear.

Coming out as bisexual isn't a case of “one foot still in the closet,” a stepping stone on the way to being “fully” gay, nor is it a temporary phase someone eventually grows out of. This attitude is blatant erasure, denying a bi person their identity based on the assumption that bisexuality doesn't actually exist. Bisexual erasure, such as in the examples I gave above, both minimize and reject bisexual identities – as implied by the name, it erases them.

But bi erasure can take more subtle forms as well. It can show up in the way we describe relationships, the way we perceive the people around us, and in the way bisexuality is portrayed in the media we consume. In the coming weeks, I'll be writing more about the way bi erasure exists in society and the effects it has. I hope you read along and weigh in with your own thoughts and experiences.