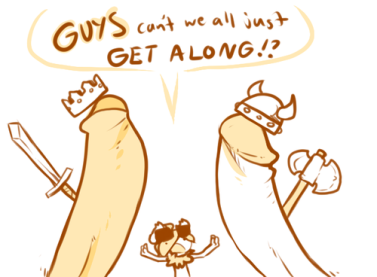 This question might get me into a bit of trouble, and I just want to preface this by saying: I don’t care about the state of your penis! Circumcised or not, a penis is a penis.

Even though I’m a woman, I’ve still found a lot of benefits to having an uncircumcised penis, both for me and for him.

Hygiene is important: Uncircumcised men do need to make sure to properly clean the penis and under the foreskin, otherwise they do have a higher chance of infections.

But that seems to affect young children as opposed to grown men, who are pros at cleaning their penises.

Ultimately, I look at this pro and con list and wonder why being cut is more popular when there are less benefits to having it! I understand less still why that popularity can turn into an “uncircumcised witch hunt” in a way. Most women can’t tell the difference between a cut and uncut penis by sight while erect because as the penis gets hard, the foreskin stretches down, yet some are still adamant that they dislike uncut penises.

What do you guys think about all this?